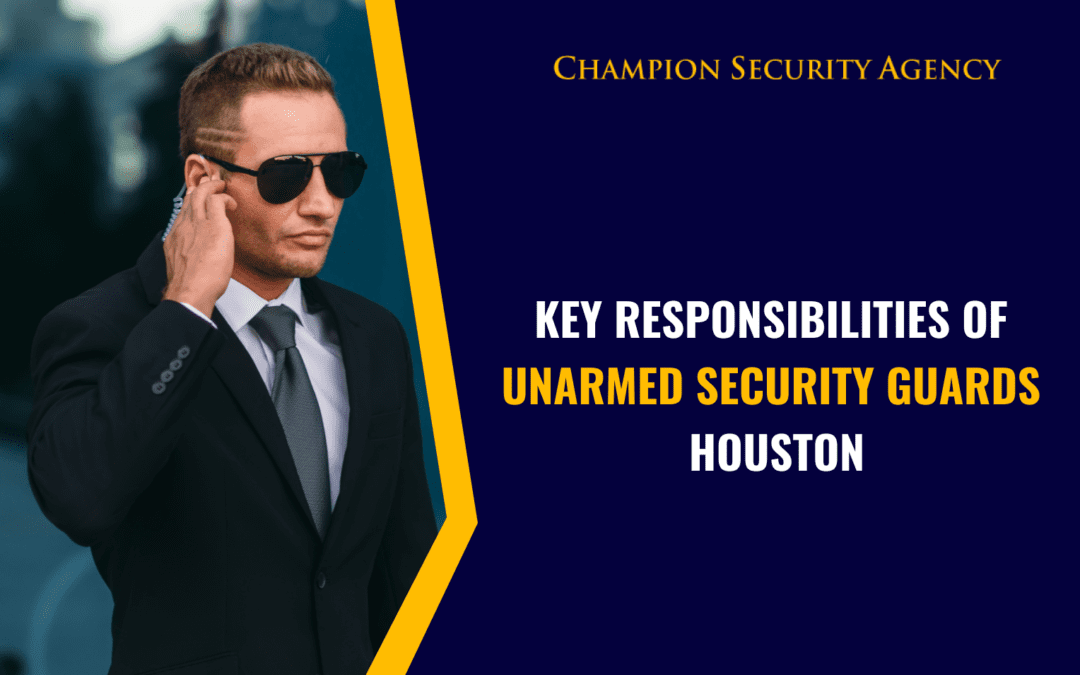 People feel safer when they are escorted by security personnel. Unarmed guards are the type of guards who don’t carry weapons but go through the same extensive training that other types of security guards do. You can find unarmed security guards everywhere: in shopping malls, schools, retail stores, banks, and even amusement parks. They are hired for the safety of visitors as well as occupants.

It is a common misconception that armed guards are more effective and offer the best level of security, but you might be surprised to see the efficiency of an unarmed guard on the job. Here we have collected some key responsibilities of the unarmed security guards in Houston so you can understand them better.

Threat Barrier: The greatest approach to preventing crime is to prevent it from occurring in the first place, which is exactly what occurs when you have actual guards on-site. Simply having a visible presence on your property will prevent any thieves from attempting to trespass. Due to poor reaction times, they’re frequently prepared to risk cameras and alarms, but they know they can’t move quicker than genuine on-site guards.

Keeping Visitors Calm: It’s also worth remembering the psychological value of unarmed security personnel. Most visitors to a company will feel better at ease if they see guards and know they are being watched over. With armed guards, this isn’t always the case. Visible firearms can make people uneasy, therefore it’s typically preferable for consumers to see only unarmed guards.

Making a record of visitors: Sometimes a security guard does not only work as a guard but also does the work of a watchman. It is crucial to keep an eye on the visiting people and make a record of everyone. It will not only save you from burglars or other harmful people but also help the police in case of any emergency or clash on the premises. Also, they monitor the security cameras to check for any unusual activity.

Maintaining Order: If there is any gathering or festival celebration at the office or any place that requires safety measurements to be taken, the unarmed security guards play their part responsibly. They keep things in control and never let anybody destroy anything or harm any guest. Also, they make sure that all guests are stamped and safe.

In the case of violence: Unarmed security personnel are taught to briefly hold a person if the situation develops into violence or if there is a reasonable basis for the arrest. His next move will be to contact the local police for assistance. However, if the crooks are armed with lethal weapons, the unarmed security officers will almost certainly seek the assistance of local police. This necessitates a calm mind and sound decision-making, especially when delaying assistance may result in the loss of life.

To sum it up, a security guard’s duties and responsibilities do not stop with guarding, monitoring, patrolling, and informing authorities in the event of any illegal activity. In other cases, they may be expected to do errands, react to text messages and phone calls from their bosses, and complete other duties. Some unarmed security guards Houston are engaged for a specific purpose, such as assisting those in charge of securing cash or other valuables, and their role is to secure the items throughout travel. Hence, the unarmed security guards play a pivotal role.

Get your assets protected.
Call us today!